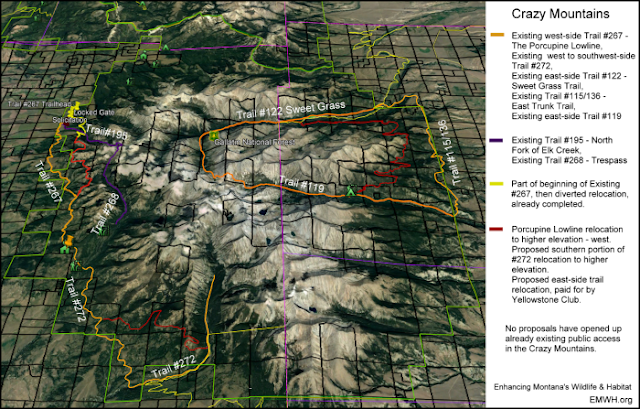 Recently touted as a “made-in-Montana compromise”, this 3rd land exchange proposal (east-side of the Crazy Mountains) is anything but – let's call it what it is – a big money sellout.
For the public trust's sake, here are the tip of the iceberg points, and how these land exchanges are shrinking the Crazy Mountains.
To summarize what got us to this point:


2015, Responding to Sen. Daines, concerning Trail 115/136, Erickson wrote, “The Forest Service maintains that it holds unperfected prescriptive rights on this trail system as well as up Sweet Grass Creek to the north based on a history of maintenance with public funds and historic and continued public and administrative use.”
2017, As landowners objected to Sienkiewicz's multiple-use management, Custer Gallatin National Forest Supervisor Mary Erickson, began shifting Forest Service management, away from previous long-held FS positions defending and maintaining public access in the Crazies.
June 16, 2017, District Ranger, Alex Sienkiewicz was removed, after Sen. Daines wrote to Ag Sec. Sonny Perdue, including landowner false allegations. After public outcry and an investigation, Sienkiewicz was re-instated, but has not been involved with any proposed exchanges.
2019, The east and west-side are currently in litigation; south-side exchange is sitting after majority public comment opposition; this east-side exchange has not formally been presented to FS yet.
Taken as a whole, between east and west-side obstruction requiring litigation, proposed southern exchange, now the east proposal, we're seeing the inexcusable shrinking of the Crazy Mountains, a theft from the public's hands.
To view a satellite map with existing trails and proposed trails, go to EMWH.org, to view shrinking of the Crazy Mountains.

While collaboration and finding solutions is great, as a public trust researcher and advocate, not only do I disagree with the east-side proposal and its faulty foundation, I feel Supervisor Erickson's directing of the Yellowstone Club's involvement and money towards the Crazy Mountains is appalling, exacerbating an already flammable situation.

Please contact Senators Tester and Daines, Rep. Gianforte- tell them, “Do not legislate the East Crazy Mountains, it must go through the administrative process, the public must have input.

The east-side land exchange proposal group already held their first meeting in Livingston. A member of the public attended their tabling event and was told by one of the groups members, that the Sweet Grass Trail #122 is open to the public now and has never been limited.

This is absolutely not true. My FOIA documents show repeated threats and harassment against those that did trail maintenance work and you can view the landowner posted sign ( East Crazy Mountain obstructions page - 4th image, black and white) saying the public had to request permission and sign in.

And don't forget the harassment picture of the public who did not sign in or ask permission, in Chris Solomon's article, The Fight for Public Land in Montana's Crazy Mountains.
The landowners blocked them in by parking inches in front and behind their vehicle to harass them.

Another reminder, these trails were affirmed in the 2006 Forest Service Travel Plan, Crazy Mountain portion, which some of the involved landowners protested in court, resulting in the Court upholding the Travel Plan.

Additionally, here are the links to the Forest Service Release of Easement Interests on the west-side, easement interests we have been saying all along the public already had, which the Forest Service used to defend and we are having to litigate to enforce and in the West Crazies, need to be restored to the Public.

I am currently researching another Yellowstone Club connection in this East Crazy Mountains land exchange proposal.

A couple weeks ago, following up on an old Forest Service communication I thought was an error, involving Crazy Mountains public access, part of which is on Sweet Grass Trail #122, I went back to the Park County Clerk & Recorders office and found more landowner conveyed public access deeds. This reroute moves the public away from a portion of stream access fishing of Sweet Grass Creek, privatizing it.

As Brad Wilson has rightly asked, "Would these landowners give up their Historical Water Rights without a fight?"

Why is the Forest Service giving away our easement interests on a 100 year old trail system, instead of defending and maintaining them as they did before 2017?


"A federal judge has halted the U.S. Forest Service’s plans to log and do other fuels    reduction work in portions of an inventoried roadless area near Helena...the agency’s plan ran counter to environmental law and rules."
Congratulations Gayle, I know you put a lot of work into this.


"On Monday, the Montana Land Board voted unanimously to approve the addition of 600 acres to the 9,000-acre Garrity Mountain Wildlife Management Area."

Posted by Wildlife Advocacy at 4:31 PM No comments: