Opposition Research - Making Bullets In A War Against Conservationists

"We think of ourselves as the creators of the ammunition in a war. We make the bullets."
~ Tim Griffin, RNC opposition researcher, current Lt. Gov. Arkansas

Opposition research (oppo) is defined as the practice of "collecting information on a political opponent or other adversary that can be used to discredit or otherwise weaken them." Oppo is used to refer to the collection of information, as well as how it is utilized, for example, negative campaigning.

As I am not a candidate, I am all the more curious why I am being investigated.

Around the 15th of October, I received a letter from Montana Fish, Wildlife & Parks that my hunting and fishing license history in Montana had been requested. The person requesting my hunting & fishing license history is Naji Filali, a partner in Percipient Strategies LLC. Percipient Strategies LLC is based in Washington D.C., a new company whose website was registered in July 2016. Their website states they are, "Started and run by rising political researchers from the Republican National Committee..."

Concerning Filali, their website states he worked, "As an opposition researcher at the Republican National Committee and America Rising." This is confirmed by the Federal Election Commission website for the Republican National Committee,Itemized Disbursements, Line #: 21B. America Rising is a political action committee (PAC) that produces opposition research on Democratic Party members, based in Virginia.

So why would a Washington D.C. political opposition research firm be investigating an average citizen in a smaller state? And why my hunting license information? Is this an attempt to dig up dirt to discredit research I put out on this newsletter? Is it related to research on Senator Daines and DOI Sec. Zinke on the Crazy Mountains; or related to Senate candidate Troy Downing's FWP citations (Omnibus Hearing at the Gallatin County Justice Court is scheduled for November 15, 2017, at 1:30pm), whose campaign manager is Zinke's wife, Lolita Zinke? I was waiting to see what Downing's recent FEC filings showed for disbursements, to see if Percipient Strategies LLC was listed (not at this time).

Back in March 2017, I put out a newsletter on Rick Berman, the D.C. lobbyist with the campaign to label hunting and angling groups as "Green Decoys", especially many groups from Montana. Berman and Will Coggin targeted Back Country Hunters & Anglers, Montana Wildlife Federation, Montana Sportsmen Alliance, Trout Unlimited, Theodore Roosevelt Conservation Partnership, Helena Hunters & Anglers, Public Land/Water Access Association, etc. This is a dark money campaign, attempting to marginalize grassroots conservation advocates and interfere with our legislation.

I called the Republican National Committee to see if they actually helped to create, support, endorse or contract with Percipient Strategies LLC, because anyone can write whatever they like on their websites, most people don't bother to fact check. I was asked to send my question in an email, so they could make sure and get it to the right people. I did so on the 17th, I have yet to receive any sort of response from the RNC.

My concern has been the political targeting of conservation activists who advocate for our public trust, our public lands and public access, by a political party whose National and Montana State party platforms still include a selling/transferring of our public lands to the states.

As for myself, I am just an average citizen, they can try and find whatever dirt they like. What are they going to find on me? That I used to be a registered Republican and became an Independent? Or that I used to be an NRA member and didn't renew my membership many years ago because of their fearmongering and politics? What they find, or if they find anything is immaterial; I believe it is the intentional targeting of public trust advocates, not just candidates, to aid in their privatization agenda of our natural resources. Perhaps they thought they could find something to leverage, perhaps to silence me/newsletter? How many more conservation advocates are they digging into?

So here is my Montana hunting & fishing license history, showing Naji Filali's inquiry. You will see a gap from 2009-2011 from a ripped rotator cuff, pec and arm muscle injuries and a birth year typo. Scandalous reading here, be warned. ;)

Crazy Mountain Note
In addition to the ongoing Crazy Mountain research (hundreds of pages of new FOIA information, historical records, etc., I am looking at some of the interconnections that keep cropping up. A wee bit ago, the Stockgrowers Association and Park County Environmental Council put out a joint oped, on the separate Crazy Mountain working group the Stockgrowers got started. They stated, "The Crazy Mountain Stockgrowers’ Association stepped forward to fund a neutral facilitator for these meetings." Later, in an article on Alex Sienkiewicz' restoration to his Yellowstone District Ranger position, Brett French reported that the facilitator was Collen Coyle, "Colleen Coyle, a Bozeman attorney, has been acting as a facilitator for the group, which has met about five times." FOCM shared that Coyle had worked for Lund, which I delved into. 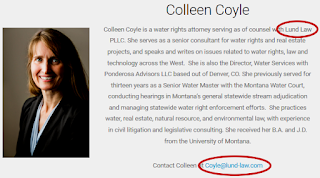 Perhaps my understanding of the word "neutral" is different than that of the Stockgrowers Association and Park County Environmental Council. Collen Coyle worked for Hertha Lund, a property rights attorney in Bozeman. Hertha Lund, married to John Grande, owns the Grande Ranch Company (Meagher County). The Grande land lies between the northwest Crazy Mountains and the Castle Mountains. Their property does not border the Crazy Mountains at all, rather, two parcels border the Castle Mountains, all parcels are north of HWY 294.

Yet, Hertha Lund was one of the 9 "landowners" that signed the "Open Letter to the Secretary of Agriculture and Senator Daines" (pgs 6-9) concerning Yellowstone District Ranger Alex Sienkiewicz, our prescriptive easement process and publications of unperfected historical public access roads/trails. Lund has legally represented the Montana Farm Bureau Association at times, MFB also sent a letter to Daines and Perdue. The Open Letter states, "This open letter is from ranchers who neighbor (adjacent to and/or with inholdings within) Forest Service ('FS') lands in the Crazy Mountains in southcentral Montana... We ranchers and members of the local and state Farm Bureau and Stockgrowers organizations." I can find no land, by individual name or LLC for Hertha Lund, adjacent to or an inholding of the Crazy Mountains.

Please join the Friends of the Crazy Mountains at the Katabatic Brewing Company, Tuesday, November 14th, from 4-8pm. If you can't make it, but would like to support protecting & maintaining these specific public FS trails, you can contribute here.

Good news for public access to our public lands!
In 2015 a hunter contacted me about a locked gate on the boundary of public/private land. The locked gate prevented public access to our Forest Service public lands on the east side of the Bridgers. I contacted the Forest Service to find this had been an ongoing problem at the FS Road # 642. One small section of this road did not have a formal easement with the landowner. John Logan, owner of Brinson Farms LLC, Prentiss, Mississippi, set up a locked gate and an outfitter on the property. Negotiations with the landowner were not successful.

The FS decided to relocate that small portion of the road, away from the South Fork of the Sixteen Mile Creek for better vehicular access on private land, to our public FS land, bypassing the locked gate. They conducted an EA, with a number of us submitting public comments in support of the relocation. Construction was conducted and completed this summer. I verified with the FS that this relocation is now open to the public. Click on the link
(Hunt Talk forum thread) for maps and more information.


2017 Western States Conservation Scorecard
At the end of the study are the one page overviews for each of the 8 states (Arizona, Colorado, Idaho, Montana, Nevada, New Mexico, Utah, and Wyoming).


Thank you to contributors & subscribers for your support; without it, EMWH would not be able to pursue this work.

Posted by Wildlife Advocacy at 3:24 PM No comments: