"The class which has the power to rob upon a large scale
has also the power to control the government
and legalize their robbery."
~ Eugene Debs


There are a number of Inconvenient Truths in this Newsletter…

Journalist Protection Act
On February 5, 2018, Rep. Swalwell (CA) introduced H.R. 4935, Journalist Protection Act, to provide a penalty for assault against journalists, and for other purposes. You can read the Text here. Concerned with the rising threats and assaults to journalists, I immediately contacted my Montana Representative's D.C. office, requesting that he support this bill. ;)
Here is Rep. Gianforte's contact information, should you share my concern for protecting journalists from assault.
Online Email Form
(202) 225-3211 D.C. Office

Troy Downing
To begin, back in Sept. 2017, I put out a Newsletter with some of the research I found on Troy Downing, a Senate candidate, whose MT residency was being questioned by writer Don Pogreba in August. I found there were also 9 FWP citations involving residency and transferring of a tag.


Shortly after, I received a written notification from FWP (per their policy), that my hunting & fishing license history had been requested, showing the requester and the provided information. I wrote a Newsletter on this: Nov. 3, 2017 - Opposition Research - Making Bullets In A War Against Conservationists. The person requesting my hunting & fishing license history is Naji Filali, a partner in Percipient Strategies LLC. Percipient Strategies LLC is based in Washington D.C., a new company whose website was registered in July 2016. Their website states they are, "Started and run by rising political researchers from the Republican National Committee…" They do opposition research. I am not a candidate, so I was curious why someone would be doing oppo research on me, an Independent voter, general member of the public.

Then on Dec. 5, 2017, I wrote on Downing's California Property Tax record, showing his current 2018 resident homeowner's exemption.
I was not able to make it to Downing's rescheduled Omnibus Hearing on Feb. 14, 2018, so I called a beautifully detail-oriented friend back in Bozeman, to see if she could attend, providing details for me. Thank you, Nancy. A jury trial date has been set for May 23, 24, and 25, 2018. Downing's attorney asked for 30 jurors instead of the usual 16-25. The Senate Primary Election is June 5, 2018.

I am wondering if they are hoping to pull a Bundy with the jury trial. If convicted, according to the FWP Uniform Bail Bond Schedule, Downing could lose his MT hunting & fishing license for about 2 years minimum. Montana is also a member state in the Interstate Wildlife Violator Compact. “When a person has their hunting, fishing and/or trapping privileges legally suspended in the Compact state where the violation(s) occurred, the suspension may be recognized by all of the member states of the Compact. Having your privileges suspended in Montana means you may also be prevented from hunting, fishing and/or trapping in all the Compact member states.” Downing could potentially lose his hunting & fishing license privileges in 46 states, not just Montana.

On Nov. 21, 2017, $15,404.25 was paid out to Percipient Strategies for “research” by the Downing campaign. Surely, not all of that was for me, but hell, they could have paid me directly to share my hunting license history and salacious details, like my lying in 8th grade about loosing a library book and paying for it; when the reality was I couldn't find a copy to buy (it was out of print) and I kept the book for myself. As a bibliophile, that lie has haunted and shamed me my whole life.
Click image for full version 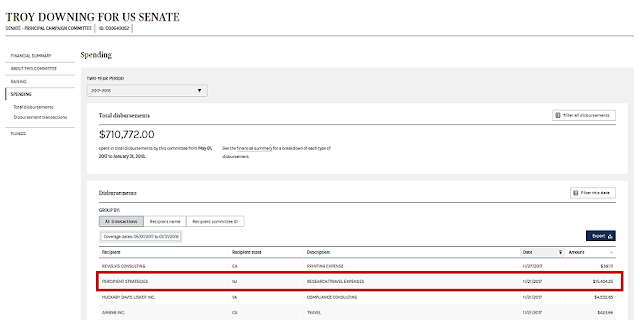 Crazy Mountains
At the last Environmental Quality Council meeting, Jan. 17 & 18th, John Brenden, no longer a legislator, appointed as a Public Member, passed out 2 newspaper clips. One was on an access situation, including the Crazy Mountains and the other was by Terry Anderson, PERC, his oped rebuttal. Brenden said that Terry Anderson was spot on and suggested he come to the next EQC meeting in March, to speak about these access issues. Brenden relayed, “I know most of these ranchers over there on that east side of the Crazy Mountains.”

I would say this is an understatement. During a discussion of this meeting on a forum, when I posted Brenden's suggestion, one of the posters mentioned that John Brenden and Chuck Rein (one of the outfitting landowners and MOGA Vice President), were brothers-in-law. I spent over 3 hours digging through an archive until I found the familial proof. Charles (Chuck) M. Rein, of Melville, had a wedding write up, which stated, “Parents of the groom are Mr. and Mrs. Lloyd Rein of Melville...Carol and John Brenden of Scobey, sister and brother-in-law of the groom...”

Brenden is more than “knowing” of the ranchers on the east side, he is married into one of their families, the Rein family. Brenden also asked at the EQC, in relation to the public's access, how would they like it if he went right into their houses, then stated, “My castle is my property.” That is not too far off this situation in the Crazy Mountains, like neo-feudalism marriages. In looking for the familial proof of Rein and Brenden, I also saw the other intermarriages between a number of the Crazy Mountain landowners that have been involved in these public access issues: Reins, Carroccias, Andersons and Zimmermans.

Rein had previously sought another type of forum for his agenda, with a private meeting set up in January. That meeting was technically a public meeting. After announcing the private/public meeting in the Newsletter, the meeting was canceled, days before this January EQC meeting.
The upcoming EQC meeting is scheduled for March 21-22, 2018, in Helena. Their agenda is not finalized or posted yet. At the point that it is, we will see if the Crazy Mountains public access and Terry Anderson/PERC are on the agenda. Personally, I don't think these people should be using our interim legislative process and elected officials to forum shop for their private agenda.
*****

Sometimes, when I do research, I often find what I am intuiting is there, but I look at all the other connectors just the same. Sometimes, I discover more, and occasionally, I find something totally unexpected, even shameful.

As a result, I need to make it abundantly clear, again, that I do not advocate, condone or excuse trespass on private property. I uphold private property rights. We might have a difference of opinion about an unperfected prescriptive easement trail, but I do not excuse trespassing off of a trail, no matter who has done it. Even when exhausted or injured, I have gone to great lengths to avoid trespassing on private property. Additionally, I feel those that publicly advocate for public access, public lands, public rights, need to hold themselves to a higher ethical and legal standard, otherwise, they put the whole conversation and work in jeopardy. We should police ourselves and our own community.
David Petersen wrote, “A minimal level of sportsman ethics afield is mandated by written law. Beyond that, say, when an action is legal but ethically questionable, or when (as Aldo Leopold long ago pointed out) no one is watching, hunter ethics is an individual responsibility. As the existentialists would have it, we determine our own honor minute by minute, action by action, one decision at a time.” More dealing with this matter in a future newsletter.

As a result of the Jan. 31st Crazy Mountain private meeting planned awry, involving a landowner draft proposal to relocate a historic FS trail #267, obliterating the northern half of it, affecting a number of other trails, some of us decided enough was enough. The public needs to know what is going on, and what is at stake with their public lands and access. We have set up an open, transparent PUBLIC meeting (agenda to be posted on the webpage as it is finalized). 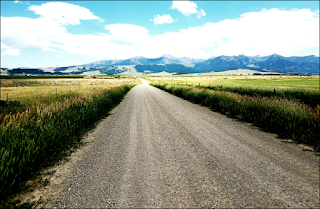 Event sponsored by Friends of the Crazy Mountains and Enhancing Montana's Wildlife & Habitat.


Montana rancher stands up for public lands by Nick Siebrasse
“The fringe element that wants to steal our shared national heritage – the lands and waters and fish and wildlife owned by us, the American people – is coming to Montana.

This Saturday, Jan. 20, public lands abuser Cliven Bundy will be speaking at an anti-public lands gathering in Paradise. A group with ties to the region, The Coalition of Western Property Owners, is promoting the event, which they’re calling 'Freedom and Property.' Neither is applicable to Mr. Bundy: He wants to divest us of the freedom represented by our public lands, and he’s already been stealing our property by illegally grazing his cattle.”

All three employees currently are meant to temporarily fill vacancies at the Department of the Interior. However, President Trump has yet to nominate anyone to permanently fill the posts.
That has seemingly indefinitely left the employees in the position of acting directors and PEER says that's unlawful…
A portion of the Vacancy Act reads that actions taken by acting directors who violate the act 'shall have no force or effect.'
'These legal infirmities give rise to an additional basis for challenging actions taken by these agencies during the past few months in court. For example, Greg Sheehan at [the Fish and Wildlife Service] has changed Endangered Species Act procedures, among other actions — all of which are void and vulnerable to lawsuits,' PEER's director Jeff Ruch said Monday in a statement.”

19 Western governors protest Zinke’s plan to change Interior boundaries
“A group of 19 governors of Western states are protesting Interior Secretary Ryan Zinke's plan to overhaul the department, saying he has not sought their recommendations.

The bipartisan Western Governors Association sent a letter to Zinke on Feb. 1 asking for a delay on the plan, according to The Associated Press on Thursday.”

Dark Money Movie (I have been so anxious for this)
A conversation with Montana-born 'Dark Money' documentarian Kimberly Reed
“New York-based documentary filmmaker and Helena native Kimberly Reed debuts her latest film, Dark Money. What began as a chronicling of Montana’s legal challenge against the landmark campaign-finance case Citizens United now serves as an in-depth look at how a network of right-to-work organizations and corporate cash sought to swing numerous Republican legislative primaries, spearheaded by the notorious subject of a 2012 Frontline investigation: the nonprofit American Tradition Partnership.

With the film’s debut just days away—and a Montana premiere slated for the Big Sky Documentary Film Festival on Feb. 16—the Indy spoke with Reed about her motivation for making the film, the challenges of conveying such a complex topic and how Montana became, as Reed puts it, the canary in the nation’s dark-money coal mine. The interview has been edited for length and clarity.”


Dark Money Video Clip
Dark Money website
'Dark Money' documentary traces campaign spending in Montana
“The Helena native was following the state of Montana's defense of its ban on corporate spending in election campaigns in front of the U.S. Supreme Court in 2012.
She thought it would be a 'Mr. Smith Goes to Washington' story, centered on then-Attorney General Steve Bullock.

After the justices struck down Montana's law and opened the elections to so-called 'dark money,' she kept returning to her home state from New York City for six years.
Her feature-length movie, 'Dark Money,' delves into Montana history with the passage of the 1912 Corrupt Practices Act; then moves to Citizens United and ends with the passage of a stronger state law and a civil case against a state senator for coordinating with those groups…

It makes its home-state premiere on Friday, Feb. 16, at the Big Sky Documentary Film Festival, with two more screenings scheduled.”

Posted by Wildlife Advocacy at 2:47 PM No comments: