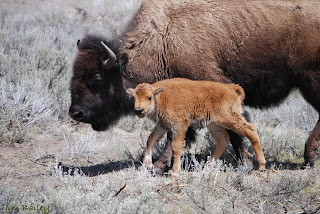 Montana has been experiencing such a war against our wildlife, especially in the Montana state legislation. For those of us in the trenches reviewing, voting and testifying against bills (especially those making the long drive to Helena frequently);  making sure that others are aware of what is taking place through media, blogs, letters to the editor; attending meetings with officials and organizations; trying to protect our WMA's for wildlife; etc.,  the last 4 months have seriously been a war. We cheer each time a bad bill is tabled and soldier on when one is not. So when a victory occurs,  like the January 2013 Park County Decision, allowing an increased territory for wild bison to leave the Yellowstone National Park into Montana, not being shot the second they step out,  it breaths new life into our efforts.

The Gallatin Wildlife Association caught the attention of a wild bison advocate, who had an idea. The anonymous advocate had seen the wildlife Gallery at the GWA website, which contained a number of beautiful photos of wild bison. GWA was then contacted with a proposal - the donation of a private collection of artwork by Crow Nation artist, Kevin Red Star. The sale of which is earmarked strictly for Montana wild bison restoration! 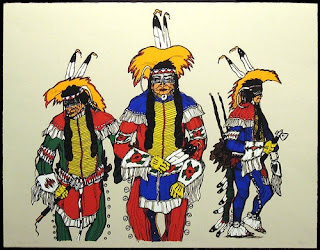 The Gallatin Wildife Association has long been a major advocate for the restoration of wild bison in the state of Montana, promoting the "controversial" idea that as a native wild species, bison deserve some native range in Montana. Bison are the only wildlife that are not free to leave the Yellowstone National Park. When they do, they are either hazed back in, shot or captured for slaughter. Some bison have the misfortune of being captured for the USDA APHIS Gonacon sterility experiments.  With the big questions being, "Why does anyone want to sterilize our wildlife? For what purpose?" The false reasoning has been that of brucellosis. But the Montana Department of Livestock and APHIS know that there has not been a single documented case of brucellosis being transferred from wild bison to cattle. They have also known for years, since genetics has lent a hand, that the brucellosis transferred to domesticated cattle from wildlife has been from the elk, not bison. Yet they still push for the slaughter of bison coming into their native, historical range - Montana.

The GWA is involved in educating the public on the real issues concerning wild bison restoration in Montana; researching and proposing various locations for restoration; working with a variety of conservation organizations in Montana, fighting the anti-bison legislation, promoting the real science of wild bison and clearing up the misconceptions concerning brucellosis; and promoting the longterm objectives of a healthy genetic stock that could reach sustainable numbers to be included in hunting. It is these continued efforts that the private collection of  Kevin Red Star Artwork will help fund.

Glenn Hockett, the president of the all volunteer non-profit organization, Gallatin Wildlife Association (established in 1976), stated, "I was honored to receive this donation on behalf of the Gallatin Wildlife Association.  We are a completely volunteer organization and once the art work sells, this will help us with our efforts to restore and conserve wild native bison both in the Greater Yellowstone Area as well as to other appropriate landscapes in Montana." 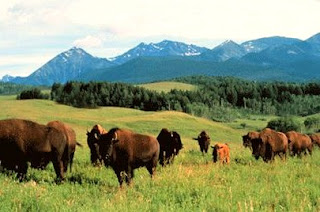 
Posted by Wildlife Advocacy at 2:03 PM No comments: