Trespass Laws are being seriously changed

We only have 2 days to reach our Representatives in the House, on a dangerous amendment to a bill - HB 231 - Revising laws regarding trespass. 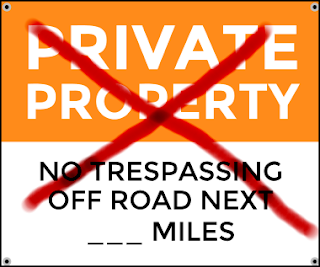 I respect private property and private property rights, lets make sure those protections for property owners and recreationists aren't destroyed.
Below is my comment I sent to the House members on HB 231 yesterday, please take a few minutes to send the Representatives your public comment objecting to an amendment in HB 231 that would set Montana's trespass laws back over 30 years (group listing of the House members email addresses at the bottom of this email, so you can copy and paste the whole block into your TO: email header, can't make it any easier than that). The bill has its second reading on Monday, 1/30/2017, the same day as the Public Lands Rally in Helena (I have flu, but I will be with y'all in spirit). Perhaps, while you are there, you can speak to some legislators about this dangerous bill/amendment before they vote on it.  :)


HB 231 PDF of text Video of the hearing with the hijacking of HB 231.(Click on HB 231 under the Video to advance it to that portion) Hunt Talk forum thread on this subject Mike Korn's perspective (retired FWP Enforcement) on the thread
Kathryn
_______________


Dear House of Representative members,
I am writing to express my concern over an amendment which hijacked HB 231, Revising laws regarding trespass, sponsored by Rep. Peggy Webb.
Last night I came across HB 231 at the laws lookup website and was shocked by what I saw passed on the 25th, I notified various hunting/angling groups and the Hunt Talk forum of my concerns.
Originally, Rep. Webb's amendment to MCA 45-6-201 and 203 were justifiable for residential private property concerns from squatters, for example. But listening to the audio, you hear Rep. Casey Knudsen, joined by Rep. Harris, hijack the intent of this bill and gut the trespassing laws that were enacted under HB 911 in 1985, in effect for over 30 years now, which protected both private property owners and recreationists. I question the motivation. Why?

If preventing trespassing of private property is the ideal, which I uphold and advocate, how is striking these preventative aspects of the trespass law going to help achieve that?

Additionally, if this hijacking of the bill should pass and become law, many informational publications, which have had this trespass law published to educate the public at large, will have to be revised, published and distributed, at great taxpayer cost and time, the matriculation of which to the general public would probably take a couple years at least, meanwhile, this bill would go into effect immediately, making the public in danger of costly citations and legal costs.
Outdoor recreation is one of the largest economic drivers in Montana. What would be the impact to out of state recreationists or international tourists unintentionally trespassing because there was no markings or signage assisting in advising the public? Will Montana then develop a bad reputation, like a speed trap, of a public recreation trespassing trap?

Not intending to trespass, respecting private property rights, I own and use a high end Garmin GPS with landownership maps when I research and recreate, but I also know that landownership changes rapidly and chip updates do not always show up, or a road looks public and a portion of it is not or the road is public but the land on either side is not and that posting helps to clarify to the public what is private. Land owner orange markings and signage are beneficial, most especially to those that do not own such equipment. Those orange markings and signage help protect private property interests.

The following was struck -

"To provide for effective posting of private land through which the public has no right-of-way, the notice provided for in subsection (1) must satisfy the following requirements: (a) notice must be placed on a post, structure, or natural object by marking it with written notice or with not less than 50 square inches of fluorescent orange paint, except that when metal fenceposts are used, the entire post must be painted; and (b) the notice described in subsection (2)(a) must be placed at each outer gate and normal point of access to the property, including both sides of a water body crossing the property wherever the water body intersects an outer boundary line. (3) To provide for effective posting of private land through which or along which the public has an unfenced right-of-way by means of a public road, a landowner shall: (a) place a conspicuous sign no closer than 30 feet of the centerline of the roadway where it enters the private land, stating words substantially similar to "PRIVATE PROPERTY, NO TRESPASSING OFF ROAD NEXT___ MILES"; or (b) place notice, as described in subsection (2)(a), no closer than 30 feet of the centerline of the roadway at regular intervals of not less than one-fourth mile along the roadway where it borders unfenced private land, except that orange markings may not be placed on posts where the public roadway enters the private land.(4) If property has been posted in substantial compliance with subsection (2) or (3), it is considered closed to public access unless explicit permission to enter is given by the landowner or the landowner's authorized agent."
HB 911 was supported by the Montana Stockgrowers Association, the Montana Cattlemen's Association, the Montana Farm Bureau Federation, the Montana Wildlife Federation, Trout Unlimited, MT FWP, Montana Cow Belles, Sweet Grass County Preservation Association, and individuals. Some quotes below.

“The Montana Stockgrowers Association supports passage of House Bill 911. House Bill 911 is the result of the interim study which considered impacts of the stream access problem upon private landowners. The testimony given given during the hearings of the interim committee revealed the trespass laws of the State of Montana were not working to protect private property rights...
House Bill 911 corrects both problems. The bill is essentially a minimum posting law... House Bill 911 also broadens the powers of the fish and game wardens to enforce the trespass laws. This is needed in light of the stream access decisions since the potential for conflict between private property rights and public recreational rights will increase.
The Montana Stockgrowers Association urges passage of House Bill 911.”
The Montana Cattlemen's Association - “Mr. Chairman, members of the committee, H.B. 911 contains some real improvements to the trespass law, from both the landowner's and sportsmen's viewpoints... Giving the Landowner flourescent orange paint as an alternative to printed 'no trespassing' signs solves one of the mechanical problems involving posting notice... It (HB 911) represents a necessary improvement to the law.”
“Mr. Chairman, members of the committee for the record my name is Lorna Frank, representing Montana Farm Bureau.
Farm Bureau delegates at the 65th Annual meeting last December were very concerned about getting stronger trespass legislation passed which would insure that private property will be free from public use except with permission from the landowner.
Farm Bureau supports HB 911 because we feel it protects private property and urges this committee to give HB 911 a do pass recommendation.”

I urge the members of the House to either kill HB 231 or insist that the Knudsen/Harris amendment above be struck from the bill, returning it to the original intent represented in the Jan. 12th version.

Posted by Wildlife Advocacy at 9:41 AM No comments: