"I don't think there was a winner in this election.
The democrats lost the vote and the republicans got a loser."
~ Antlerradar, Hunt Talk Forum

They say hindsight is 20/20, but it is not like there weren't signs along the way. It is not like everything was covered in camouflage, so blended in, that you could not see the issues for what they were. In the end, it wasn't a candidate that lost, it is Montana as a whole, regardless of which way the wind blew.

I read an interesting economics article, over a month ago, about zero-sum game theory or economic theory. Bear with me. Imagine a cake, a fixed situation. For someone to "win", get a larger share than another, they have to increase their share by taking some from another, causing them to "lose". In zero-sum, there have to be losers for someone to be a winner. You very much see this in Trump's world view.

As an egalitarian, I do not have a zero-sum world view. I believe in building up the whole that we all can benefit, building up partners.

Disgusted with all the politics, the partisan bs, here are some of my perspectives of this recent Montana election.

As an Independent, I am revolted that I only get two choices - hell, I have over 1500 font files on my computer because I like choices. Yes, I would like other options, like a Theodore Roosevelt type of candidate!

Breaking this down, I was disappointed in the Democratic Party's choice. I had emailed our local Gallatin County Party with my suggestion for Amanda Curtis - she had governmental experience, had already been vetted, had a previous network of supporters that could be activated quickly, and she is extremely passionate for serving the public and very much exhibits accountability (must be something in the Butte water that breeds such passionate advocates), etc. 5 of Gallatin County's votes went to Curtis.

When someone recently asked who the people were that voted for Quist in the primary, I linked to the Democratic County Committee webpage. That is when it hit me, there were not 56 county committees there - I counted - there were only 28, exactly 1/2 of the 56 counties.

When I grew up, my father had a saying, "Don't do a half assed job." Being a graphically minded person, I couldn't figure out as a very young girl, why a phrase would develop with a one cheeked person in relation to labor effort. As I got older and had ag experience, I figured it had to do with a team of asses for labor, the results greater than the two divided.

Now hearing the rumors that the Democratic party was not wholly invested in the election was bad enough, because my philosophy in life is if you go into a situation believing you will fail, you will make decisions to ensure that you do. Not good strategy in my book. But looking at only 1/2 of the 56 counties represented, that does not speak to me that the party of the "people" is invested in the people of Montana when there are only 28 county committees.

And if you don't think that has bearing on elections, take a look at this New York Times Montana county elections map. I was watching their page live that night because it was faster with more parameters than MT Secretary of States website. Anyway, I took a screenshot of the image, blew it up, added the county names in and added a white D to the counties that are listed as having committees. See for yourself, a picture is worth a 1000 words. 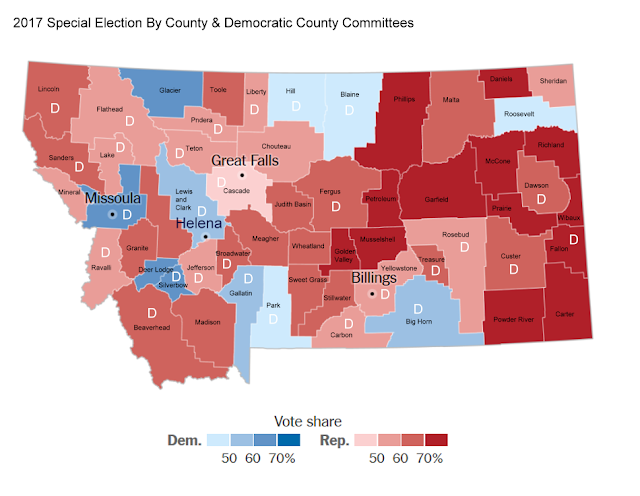 So if anyone wants to take an honest look at being the "party of the people", here is your roadmap to correcting this situation.


Now, I was not in Montana back in the day, but I have read about  Montana's Copper Kings, people trying to buy legislative seats and such. This appears to be a revival effort in a number of the last elections - Dark money made Mont. election ugly before assault , with nearly $5.2 million spent as of May 5th. This election made national news not just because of television shooting candidates talking about the Second Amendment, while Gianforte "allegedly" grabbed a reporter for asking a question about the Health Care CBO numbers, body slammed our First Amendment, freedom of the press, to the frickin ground the night before the election. Some voters had voter remorse, having already sent in their ballots, wanting to know if they could change their vote. The Lee Enterprise newspapers, however, in their voter remorse, were able to rescind their endorsements, while the Missoulian included another example of Gianforte's temper when they interviewed him; in a case of too little, too late, this example was not previously published to help give the public a heads up. Gianforte did not publicly apologize to Ben Jacobs, until after he won the election, nor did he apologize for an attempted bullying lawsuit to force FWP to abandon a perpetual public access site easement.

Did Montana win in any way in this special election? I don't think so.

Because even though a candidate won the election, this candidate will have future issues with the press for one of their own being treated criminally. And the sh*t will continue to roll downhill.

As stated by the Helena IR's article, Gianforte may face extra scrutiny from D.C. press after assault charges -

"At least one longtime D.C. political analyst believes that Gianforte may also be shunned by the Republican leadership and given less important committee assignments in an effort to avoid tying the Republican party to his personal controversy. James A. Thurber, a distinguished professor of government at American University and the founder of the Center for Congressional and Presidential Studies, said the fact that Speaker of the House Paul Ryan had call on Gianforte to apologize was telling.

'For the Speaker to publicly say, "The gentleman should apologize," something generally doesn’t get to this,' said Thurber, who has written 12 books on American politics. 'Therefore, the party leadership may take him aside and say, "You've got to be a little more civilized in terms of the way you interact with the press." '

Thurber said the controversy could affect Gianforte's stature in Congress.

'People that have been around a long time, when they’re judging who should get certain committee assignments, this doesn’t help (Gianforte). There are things that are unsaid that happen. There will be opportunities that don’t come about (for Gianforte) because of things like this, but he’ll never know it.'

He added said that normally, not many people even know who freshmen members of Congress are.

'To pop out like this among freshmen, especially in a special election, is rare,' Thurber said. 'To be a showboat this early is not good. Usually, nobody even knows who they are. They co-sponsor a few bills, do constituent work and vote with the party.'

Thurber also predicted that Gianforte would suffer politically if he becomes a national punchline, especially if his interaction with Jacobs is parodied by Saturday Night Live, which Thurber said on Friday afternoon would 'probably' happen.

'If he turns into a joke, that’s deadly for a public official,' Thurber said. "


So I would admonish, both the Republican and Democratic parties, to get their act together, for the benefit of MONTANA, and provide decent candidates before the midterm election so that Montana does not continue to be a political embarrassment on the state and national scene. And to the voters, I sure as hell hope that "the people" will demand better representatives than what we have been served of late.

And just to add some food for thought, and because I don't advocate zero-sum game or economic theory - being tired of hearing all the polarized party ad hominem attacks of "libruls" and "trumptards" being out of touch with the people, here are some economic visuals based on the 2016 county votes in the national election (I didn't vote for either of these national candidates) and a paper on our public lands county economics. I believe we can build the whole up, but first, people need to have eyes to see what is currently going on.

I expect that some are not going to want to see or hear this, but the below chart showed the economic output by county, correlated with how the county voted in the 2016 presidential election. On a national level, less than 500 US counties, liberal by some political standards, are economically carrying more than 2,600 counties. 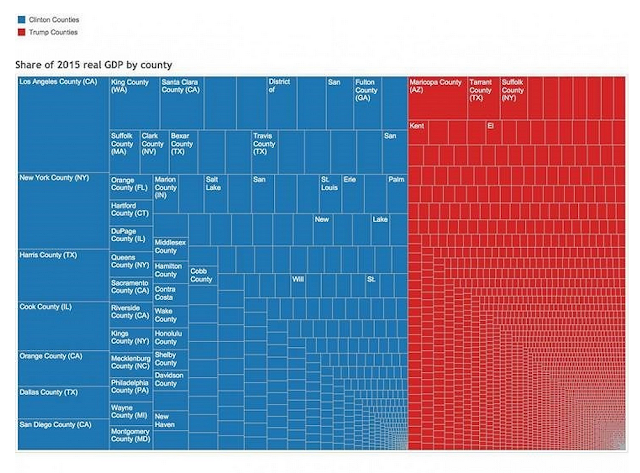 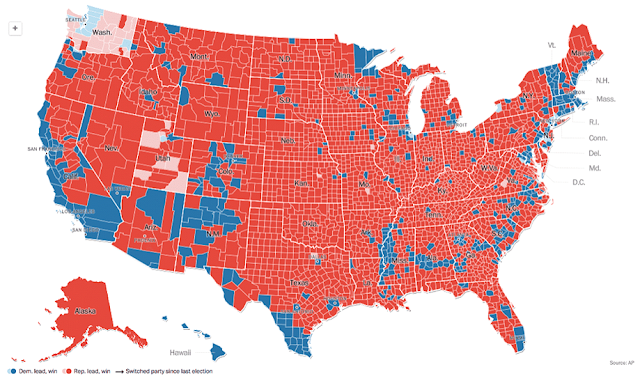 So those are some of my post election thoughts. We, the people, deserve better; Montana deserves better!

Even if you are not from Montana, you need to read this, the applications go beyond our state borders.

For over a year, Rick Berman and Will Coggin (D.C. special interest lobbyists) have been attacking grassroots hunting & angling groups, especially Montanans, labeling them "green decoys". During the 2016 election, I found Montana Supreme Court candidate, Kristen Juras' paper against the public trust doctrine and Montana's Stream Access; PERC (Property and Environment Research Center) put out an oped attacking the Public Trust Doctrine and Montana grassroots hunting & angling groups.  During the 2017 Legislative session, a number of legislators attacked the Public Trust Doctrine, equating it with "a taking", making it sound like a dirty word; Coggin began emailing our legislators attacking the local hunters and anglers that defend our public trust; and certain special interest legislators publicly attacked the grassroots groups attempting to brand them with the slanderous "green decoy" label. Enough was enough. I had to make time to refute all the bullshit.

Despite Juras' belief that Stream Access is a monumental erosion of private property; despite Sen. Jennifer Fielder's "fears" and lack of understanding; the Public Trust Doctrine is not new, it predates our US and Montana Constitutions, and is already in our Montana Constitution. Building on documentation I had been accumulating, I have spent the last couple months on this refutation, to arm the public with the truth about the foundation of the public trust doctrine and our stream access - to change the conversation.

Utilizing my pre-conservation research background, I have woven together this refutation history with endnotes for veracity. Additionally, I set up a webpage to house every piece of documentation involved in PDF for verifying, reading and downloading, including Supreme Court cases and Montana bills that go back to the 1800's.

The history provided illustrates not only the older Public Trust Doctrine foundation, but also examines the present attacks, especially in Montana, by out-of-state dark money interests and local efforts to undermine the Public Trust Doctrine itself, as well as the grassroots hunting/angling conservationists that have long defended the public trust.

To ensure our Montana Stream Access is here to stay, we need to educate and equip ourselves with the Public Trust Doctrine, defending it against private, legislative and judicial attacks; diligently and tirelessly challenge each access violation, in order to preserve our world-class, “Best in the West”, Montana Stream Access, for future generations.

The Public Trust Doctrine & Montana's Stream Access is brought to you for free and is open access for non-commercial use. You may download, view, copy and print and distribute this document as a whole. If you would like to contribute towards the many hours of research and compilation, it would be greatly appreciated, but this is first and foremost a labor of conservation love, to assist in Putting the "Public" Back In "Public Trust". 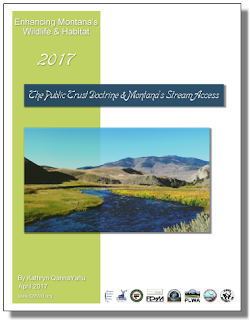 Posted by Wildlife Advocacy at 5:04 PM No comments: