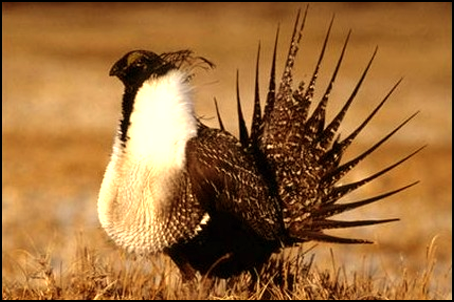 Critical Sage Grouse habitat spans 11 states in the western US - CA, OR, WA, ID, UT, NV, CO, WY, MT, ND, SD. The US Fish & Wildlife Services is in charge of the Endangered Species candidate listing process, gathering all the necessary data, which would normally be available to the Public after the finding is released in September 2015. That normal FWS data process has been bypassed, which will deny the Public our rights to that information.

A couple days ago I received a call, relaying part of a conversation with a US Fish & Wildlife Service employee from Colorado, concerning the sage grouse listing process. The caller was concerned that the process mentioned would mean data would not be available to the public and asked me to look into it.


So I called Region 6 office in Denver, who is spearheading the sage grouse listing research and spoke with Stephen Torbit, explained the wee bit of conversation relayed. He remembered the discussion and explained that some states (there are 11 involved with the sage grouse issue) have state statutes that prohibit the release of information collected from private property. He said that Colorado was one. I asked what other states had this statue, he did not know. I repeated my notes back to make sure that I understood him and had my notes clear. FWS is not housing the state wildlife agency biological data, FWS does not have a copy, any possession of the state data.


Now on the USFWS sage grouse web page they house quite a bit of information and documents on this complex subject. On the Status Review page it states, "The Service must complete a status review for greater sage-grouse by September 30, 2015." I wanted to know about the scientific data requirements so I checked out their Resources > Documents page . If you look under the Endangered Species Act subsection you find a number of documents. The Fact Sheet states, "After thoroughly analyzing the best scientific and commercial information available, the Fish and Wildlife Service has concluded that the greater sage-grouse warrants protection under the Endangered Species Act." The Questions and Answers page states the same, "After evaluating all the available scientific and commercial information regarding greater sage-grouse, including an analysis of the threats to the species and sagebrush habitat, the U.S. Fish and Wildlife Service has determined that protection under the Endangered Species Act (ESA) is warranted." Again, on the Frequently Asked Questions page, concerning the Data Call, we see the same statement, "Over the next several months, the Service will be gathering and analyzing available information on the species as part of its status review. The Service is required to use the best scientific and commercial data available in the development of ESA determinations and any subsequent proposed rules. The listing decision is due in September 2015." - the best scientific and commercial data available!

In my mind, the best scientific and commercial data available includes the population, distribution, geospatial, etc. data from the state wildlife agencies.


The USFWS in their data call, did not RECEIVE/COLLECT population, distribution,  geospatial data from the state wildlife agencies concerning sage grouse. What they did was create a computer program, with certain criteria, take the program to the states. The states were informed ahead of time to make sure their data was in shape to be processed by the USFWS program, then on the state computers the program was run. The analysis was created and the USFWS took only the analysis produced. Therefore, they do not have any possession of the state data. This is a bypass of their regulations concerning "the best scientific and commercial data available.


I was told by a retired USFWS biologist that when FWS makes a biological determination they have to make the data upon which the finding is based available to the Public upon request, either through an informal request or through a FOIA. But if FWS is not in possession of that data, they have nothing to give up. So anyone wanting to conduct an independent or peer review of the analysis after the Sept. finding is made public, would not be able to do so. They would have to go through the states with a public information request and I can personally tell you from previous MT FWP requests, what a crap shoot that is. Additionally, at least CO has a state statute to not release some of that data. With everyone that I called in the last 2 days, I kept asking what the Endangered Species formal status review process requirements were for data collection. No one could or would tell me.


Friday, Mar. 3rd I called Regions 6's Theo Stein, he was listed on the USFWS's Greater Sage Grouse page as the Region 6's Public Affairs Office. He confirmed the information I found out the day before, repeating that CO has the state statute. I asked if any of the other states had the same statute. He did not know but would look into it for me and asked me to send him a contact email to reply to, but that he would be out of the office for about 8 days.

Theo also stated that the same situation as the state data was involved with the NRCS data (Natural Resources Conservation Service - USDA), that they were also reluctant to provide data so it was analyzed and again, only the analysis taken. I asked if there were any other organizations or agencies where this was also done? He replied "yes". So I asked who were the other groups, He said he did not know but could also get that information for me. I asked him about the criteria for the modeling, if that was going to be made available to the public, he said he would check, but thought so.


I began calling FWS FOIA offices to see if the Federal exemptions that apply to their FOIA's superceded, or trumped any of the state statutes exempting information. That was not clear. But it made me think about the Supremacy Clause of the US Constitution, that Federal law trumps state law, started pursuing that line of inquiry, as well as looking through the Code of Federal Regulations for FWS and Endangered Species, trying to find the requirements for the scientific data gathering process.


US Fish & Wildlife Services is a Department of Interior Federal agency, run by our Federal Taxpayer dollars for the benefit of the Public of our Public Trust resources - our sage grouse and its habitat, in this particular case. And on a state level, it is our sportsmens dollars that pay for our state wildlife agency conservation efforts, again, in this case, our sage grouse and its habitat, producing the data that our state wildlife agencies are using.


So why would the Public be excluded from this data?
Why would the FWS deviate from the process they used in collecting data from the states in their 2010 finding?
Why is having the FWS population, distribution, geospatial  and other data important?

What this means: Lets say that when Sept. rolls around and the sage grouse finding is produced on whether or not sage grouse will be listed, because this is a highly contentious issue with a diversity of stakeholders, someone is bound to disagree and file a Freedom of Information Act request. When you do, it will take awhile for your request to be processed, which could take a couple months, so that might take us up to end of Dec. 2015, beginning of Jan. 2016. Then you receive the requested data and start the laborious task of processing it (now I love data mining so this is a fun part for me), which could take some time due to the volume of what would be produced. So maybe you are looking at a month or two to sift through everything (now you are up to about March 2016), only to find there is no population/distribution/geospatial data from the state wildlife agencies! By the time you get back with USFWS to find out where the data is and why they didnt include it in your FOIA, you might be pissed. You cant do an independent analysis, you cant get it to scientists to do a peer reviewed analysis. You might be looking at a year, from now, to get to this point.

This is where someone might be inclined to sue the FWS for not including the data their findings are based on. This will take more time and more money and our USFWS will have to respond, so that is even more time and our taxpayer dollars going right down the toilet. Meanwhile we still have the issue with the declining sage grouse to deal with. This could cause more confusion over the issue, make the situation more volatile, with more accusations flying around. This is not a desired future.


Finally,  I found online what I been asking and looking for and not receiving - the rule book for this bloody game. I like situations like this spelled out in black and white. As a public trust researcher, I especially love agency handbooks. As Lee Gustafson wrote of me today, "She is a master bull dog researcher". I love to hunt data and am nothing if not persistent.


The USFWS Endangered Species Consultation Handbook, Section 7, page 14, of the Glossary and Terms it states under  "Best available scientific and commercial data"
- to assure the quality of the biological, ecological, and other information used in the implementation of the Act, it is the policy of the Services to: (1) evaluate all scientific and other information used to ensure that it is reliable, credible, and represents the best scientific and commercial data available; (2) gather and impartially evaluate biological, ecological, and other information disputing official positions, decisions, and actions proposed or taken by the Services; (3) document their evaluation of comprehensive, technical information regarding the status and habitat requirements for a species throughout its range, whether it supports or does not support a position being proposed as an official agency position; (4) use primary and original sources of information as the basis for recommendations; (5) retain these sources referenced in the official document as part of the administrative record supporting an action; (6) collect, evaluate, and complete all reviews of biological, ecological, and other relevant information within the schedules established by the Act, appropriate regulations, and applicable policies; and (7) require management-level review of documents developed and drafted by Service biologists to verify and assure the quality of the science used to establish official positions, decisions, and actions taken by the Services during their implementation of the Act. [59 FR 34271 (July 1, 1994)]


The USFWS is required to gather, use primary and original sources of information, and retain these sources in the official document as part of the administrative record supporting the finding they will be producing and making available to the public this Sept. They have not done so. So how can management level reviews of documents developed and drafted be used to verify and assure the quality of the science used to establish the official position that will be taken in Sept.?


I have not found out yet by whose direction FWS has changed this process, nor why, but the Public needs all the data evidence available in accordance with the regulations. FWS needs to be able to back up their findings, according to responsible evidentiary science. Dept. of Interior Secretary, Sally Jewell, needs this retained source data before putting her name to the finding in Sept. 2015. But most of all, the sage grouse and their habitat need it for future generations.