The Face of Things To Come... If We Don't Mobilize To Stop It

"We can and should have an abundance of trails for walking, cycling, and horseback riding...
In the back country we need to copy the great Appalachian Trail in all parts of America,
and to make full use of right-of-way and other public paths."
~ President Lyndon B. Johnson


The Face of Things To Come... If We Don't Mobilize To Stop It

I woke up to poison ivy this morning. I have a great poison ivy soap that neutralizes the urishiol, so this will pass quickly. But how I got poison ivy is not so easily remedied. I got it yesterday, documenting one of our blocked FS Trails, #267 - the Porcupine Trail, in the NW Crazy Mountains.

This morning I not only woke up to short term poison ivy, I woke to another PERC article equating our historical roads and trails access to trespassing, and their privatizing perspective of those trails with Uber or Airbnb, that the public should pay landowners for access we already have to our public lands, like a toll road. On the 14th, there was a PERC article in Colorado on this issue. I'm starting to get a Billy Goat Gruff vs. the PERC Troll editorial cartoon in my head, which is quite appropos if you understand that the Crazy Mountains are home to one of the largest Mountain Goat populations in Montana.

So here we were, Brad and I, from the trailhead of the FS Porcupine Trail #267 to the locked gate circled in red. 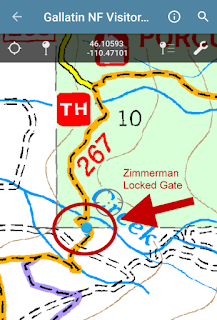 So Brad takes me on this trail where I am documenting with video, photos and gps for the big interactive Crazy Mountain map soon to go up. I documented blaze trees, which help to let the public know where the trail is, especially if you don't have gps. Then we get to the boundary line of a property owner, Zimmerman, who has a gate blocking this historic trail that goes through that property, connects to the main Porcupine Lowline Trail #267 and another trail #195, which runs through mostly FS public land heading south. Zimmerman is one of the landowners which outfits and grazes, who signed the letters that resulted in the removal of Alex Sienkiewicz as the Yellowstone District Ranger, reaching out to Senator Daines up to newly sworn in Ag Sec. Sonny Perdue. 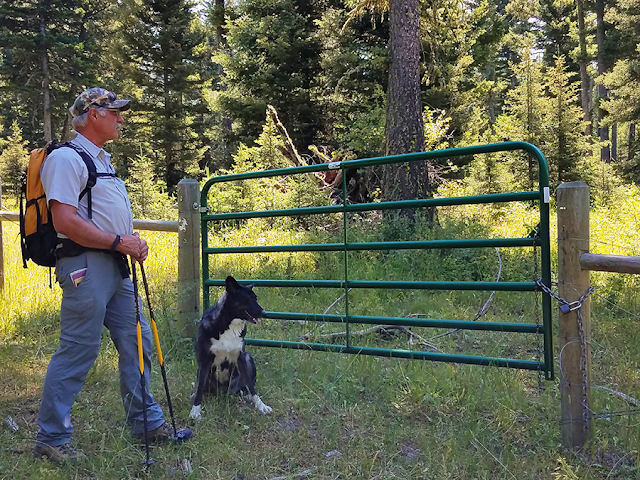 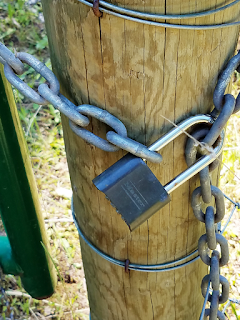 If you were not intimately familiar with this trail, you would probably be deterred by this lock and gate. 2 years ago Brad had seen a Private Property, No Forest Service Access, No Trespassing sign at that gate, which he told others about; it was not there now, but you could see the remnants of FS signs on the wooden posts. We were not deterred, we passed the gate, followed the trail on my highly accurate gps and I photographed the blaze trees along the way, until we got to the meadow clearing. We then returned to the FS public lands.

On the way back down the trail, Brad spotted some white in the brush. Thinking it was a Forest Service sign that had been removed, he went down to get it. It tuned out to be the metal Private Property sign that used to be at the gate. 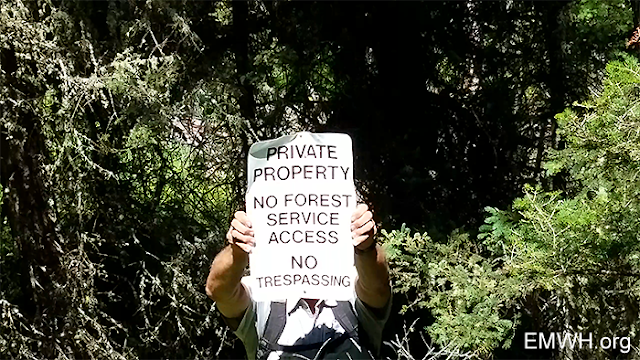 Get a good hard look at these pictures.

This could be you trying to access our Public Lands on our historic public access trails. This could be the face of all historic unperfected roads and trails on our public lands to come.

I am including information for submitting Letters To the Editor or if you are part of an organization, a hunting/angling or other recreation group, an Opinion Editorial to the newspapers. We need to get the word out, THIS IS NOT JUST ABOUT THE CRAZY MOUNTAINS OR ALEX SIENKIWICZ. This is about all our unperfected federal roads and trails and our federal employees that follow policy, do their job, that could be targeted by any landowner utilizing their political connections.

To submit a Letter To the Editor (LTE) or Opinion Editorial (Oped), most papers have the same policy: Letters have a word limit or fewer, and MUST include your real name, city of residence and daytime phone number (they call to confirm that you are who you are and you actually sent in the LTE. In the Subject Line begin with LTE or Oped, then your title. Some papers only publish letters from within their primary readership. Opinion Editorials (Oped) from groups/organizations, established writers, have higher word limits and may request a picture.