Vigilance
"The law helps the vigilant before those who sleep on their rights."
~ Montana Code Annotated 1-3-218 Maxims of Jurisprudence

At the bottom is the Crazy Mountain March Public Meeting Invitation. Please join Friends of the Crazy Mountains (FOCM) and Enhancing Montana's Wildlife & Habitat (EMWH) for a factual informational public meeting (just a teasing taste below). 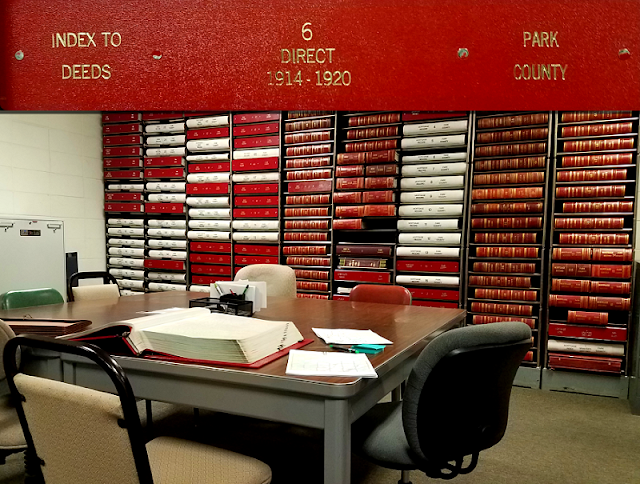 First, the Park County Clerk and Recorder office feels like my second home these days. This is where I have been doing all the Northern Pacific Railroad Grant Deed research, as well as Right-of-way research. Sections with language- "the land hereby conveyed being subject, however, to an easement in the public for any public roads heretofor laid out or established, and now existing over and across any part of the premises."

This is very important. Here is why. I read a District Court case a little over a week ago, then I realized the power of what I had been gathering since this summer. In 1948, after outfitting Crazy Mountain landowner Van Cleve had been cutting off public access, the Forest Service sued. The foundation of the US Attorney's case was the Railroad Grant deed. This was how we have the access on Big Timber Canyon Road on the east side.

"That the United States has a special right, title and interest in said highway and trail and all parts thereof, including the parts thereof situated upon lands now owned by the defendants, amounting to an easement  and right-of-way for said purposes by reason of the facts that said road and trail were established upon said land when it was in part public land of the United States of America and in part in the ownership of the Northern Pacific Railroad Company, and its successor in interest, the Northern Pacific Railway Company, which said  railroad company and railway company dedicated the same as a public highway, which was appropriated by the United States and the general public prior to the issuance of any patents therefor, thereby reserving unto itself and the general public said public highway, road and trail, and by reason of the fact that the United States and its permittees and the public have for more than 50 years used said road and trail for said purposes..."

Not only was the Railroad grant deed the foundation of the case, but it was also the foundation for the injunction to force the landowner to remove the signs and locks that were obstructing the Forest Service and the public from access. The Judge granted the injunction.

I have railroad grant easements and ROWs all over the Crazy Mountains - including the west side involving the Porcupine Lowline trail area that is currently involved in a portion of the Trail #267 obliteration proposal.

Yesterday, the Forest Service announced that they were initiating a trail relocation proposal on the northern part of #267, moving it mostly from private land to public land. Their public scoping process is 30 days for public comments, which began yesterday. Currently #267 is part of the motorized access by mountain bike, motorcycle and snow mobile, part of a system that begin at the Shields, just north of Porcupine. The relocated trail "will be designed and engineered to non-motorized trail standards." The public will not only lose this use, but the much higher and steep elevations will limit the children, elderly and limited users that are not Mountain Goats. More on this at the very public meeting on March 13th (I have 3D maps).

I spoke with the FS rep involved with this proposal today and amongst other questions, asked if they had filed their Notice of Intent with the Federal Register. I had been watching it for a week. I also asked about the FS Schedule of Proposed Actions (SOPA), that filing also did not show up on the webpage. SOPA contains a list of proposed actions that will soon begin or are currently undergoing environmental analysis and documentation. No information was provided.

I was told they are not going to do an Environmental Impact Statement (EIS), they believe that they have a Categorical Exclusion (CE). Federal action may be "categorically excluded" from a detailed environmental analysis if the federal action does not, "individually or cumulatively have a significant effect on the human environment". I questioned how they could possibly avoid an EIS when this proposed trail traverses such steep terrain and crosses a number of creeks: Porcupine Creek, North Fork of Elk Creek, Daisy Dean Creek and Horse Creek. The FS engineer I spoke with just prior stated that these are just lines on a map until he gets on the ground and sees the terrain. No engineering report has been done on this proposal prior. When I brought up all the creek crossings, the engineer said they may need bridges and/or stock bridges.

This made me wonder, did the FS do any other necessary scoping? "Scoping includes refining the proposed action, determining the responsible official and lead and cooperating agencies, identifying preliminary issues, and identifying interested and affected persons." So I called the Region 3 Livingston fisheries biologist to see if the FS ever contacted them about those creeks. They had not. I called the Region 3 Fisheries Manager Travis Horton. He also had not been contacted by the FS about the creeks. I requested the fisheries biologic data on these Creeks.

Here is the thing - this is Yellowstone Cutthroat Trout historical and current habitat. Below are two maps from the MT FWP website section dealing with the Yellowstone Cutthroat Trout Conservation page. There is a Memorandum of Understanding and Conservation Agreement between various federal and state agencies on Yellowstone Cuts. YCT are a Species of Concern by the State of Montana and a Sensitive Species by the USFS. How can the Forest Service not do an EIS? I have contacted Montana Trout Unlimited on this matter. 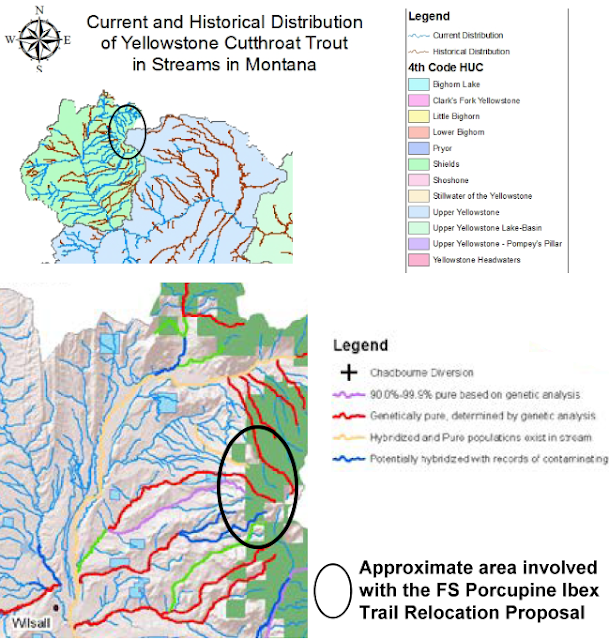 Just a final note, recent news release articles included a false statement,  "Lighthiser said the new trail is supported by several different groups, including the Backcountry Hunters and Anglers, the Montana Wildlife Federation and the Park County Commission. She said putting egos aside gets everyone to a better outcome." I called BHA and Park County Commissioner Steve Caldwell, not having seen or heard of any statement of support for this trail obliteration proposal thus far. Both stated it was not correct. An online correction was made on the article stating, "Neither group has discussed endorsing the proposal."  Printed copies have already gone out, however.

If you are coming from out of town, the Yellowstone Pioneer Lodge (406-222-6110) is offering a special location event rate discount of 20%.
Event sponsored by Friends of the Crazy Mountains and
Enhancing Montana's Wildlife & Habitat.
For more information contact:
Brad Wilson, FOCM, friendsofthecrazymountains@gmail.com
Kathryn QannaYahu, EMWH, kathryn@emwh.org
For more information: www.emwh.org Click the Crazy Mountain Link

Posted by Wildlife Advocacy at 9:01 PM